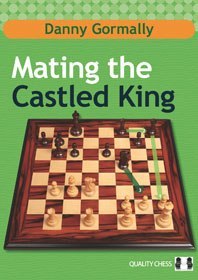 These days I have been taking my sweet time in creating this posts. There is a big reason for that: I have been exhausting those books I have already read and find interesting. I have some yet, do not worry, but sooner rather than later I will run out and my only possibility would be to make a review with the new books I read.

Luckily, I have a long list of books waiting to be read (including Gelfand's book!) and some of them are closer to the finish line than others (I cannot focus on one book at a time).

Mating the Castled King is one that I just recently finished. As the tittle suggest, it is a guide to attacking chess, similar to The attacking Manual by Aagaard which hopefully I will be reviewing soon. I am not an attacking player, I have never been, so all the stuff explained seemed very exotic to me, but very inspiring too!

This book has a curious structure. It has a second chapter with 160 exercises on combinations against the king while the rest of it (except a small test at the end of the book with 12 positions) is like a normal book where it gives you examples showing what the text is trying to argue (for example that sacrificing a bishop on h6 might be a good idea). I like this mix quite a lot, it forces you to solve problems (lots of them) and also tries to bring some good examples home.

Another sweet point for the book is that almost all the examples given in the text (or in the puzzles) were unknown to me.

About the edition of the book there is not much to say. The quality of this publisher is outstanding as it has always been and I have not found anything troublesome in it. I have even grown to be fond of this green cover which I disliked at first. The length of the book is quite all right, more over when you know a little part of it has tons of exercises.

The explanations to the attacking themes are correct. Maybe I did not found myself too much impressed by them, but what do you want? The themes themselves where kind of obvious for me. The exemplary games on the other hand I think were skilfully chosen and most often than not where downright impressive (ok, I am a novice attacker, but nevertheless). That was what I lacked. I know perfectly well that Rxf6 is very dangerous, so it is Bxh7 or playing h2-h4-h5-h6, but selecting the right examples, the more spectacular ones, or seeing how you chain sacrifices is what caught me.

I think Gormally hit a sweet spot when trying to balance how many variations to introduce in the text. Maybe in some examples it had less than I wanted them to be, but overall it has everything you need without drowning you in variations.

My conclusion about the book is very positive. I think that Gormally has made a great job with this book and players below 2300 fide will find it very interesting. I do not want to spoil other reviews for you, but if I were to buy one book on attacking chess, at the moment this would be it.
Publicado por Gollum en 8:36