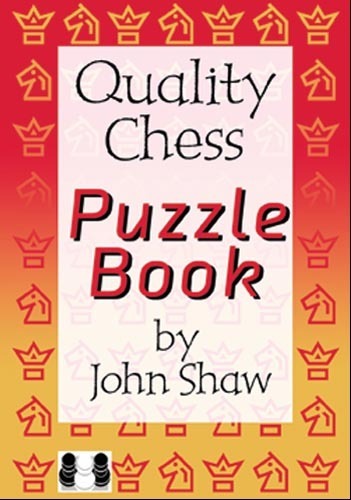 I have never been a fan of books on tactical puzzles. I do not know the reason, it could be that I find tactics beneath me (I like to win games on solid positional ground, not on the seemingly random tactical skirmish), or maybe it is that puzzle books force you to really study them, you cannot read the book without effort. It could also be that as tactics is not my strong suit, I try to avoid it as to not threaten my self-steem.

Anyway only recently I took a liking on solving tactical puzzles. Two years ago I read Weteschnik's book on tactics and found it a very positive experience, but other than that, the other books I took interest in were not about tactics.

John Shaw's Quality Chess Puzzle Book is, as you may deduce by its tittle, a book of tactical exercises. It has been a collaborative effort of the publisher (I seem to recall that Aagaard provided the exercises for Shaw to choose from, and Shaw chose them and wrote the prose of the book).

As a disclaimer, I must admit that I have not studied the whole book, but studied the first 512 exercises (around 70% of it).

Unlike traditional puzzle books, this one is not organized by theme, nor it is organized by difficulty. It contains 15 chapters on random themes. For example there is a chapter with some of Ivanchuk games, two other called Missed opportunities, etc. The point is that the themes make no sense from a purely chess perspective, so you will not be thinking about pins in this chapter and forks in the next one, because you will have no idea what to expect. Inside a chapter, the level of the exercises increases, but it lacks any scale to guide you on how difficult an exercise is.


The book contains 735 exercises (I remind you that I can only truly talk about the first 512 of them) plus at the beginning of each chapter there is a short introduction with some more games (which I did not care enough to study and do not think you would miss anything by ignoring it either).

The edition I own is the paperback one and I am quite happy with it (usual Quality Chess). As this book will expend a lot of time in your hands, expect to wear it off fast. In my case, the cover is starting to suffer, but nothing plasticizing it would not solve.

I have developed a liking of hardcover books (which in this case is 6€ more expensive) and now I regret not having that edition instead. That is because it seems to me now that this book can be enjoyed in many years to come, and having a better edition makes sense, as 20 years from now would be good as new. But do not let my snobism affect you.

At 735 exercises the book is huge. Each exercise costs you less than 3 cents of an €.


I have a little guide to make these reviews, and one concept I review is the prose. As this is a puzzle book, talking about how it is written makes little sense, but habits are good, and guides are good too. So the little prose the book has is good, sometimes Shaw makes jokes, and sometimes he tells you stories. I like it. But of course it is totally irrelevant for this type of book.

The analysis, as far as I have dared to oppose Shaw, is spot on. I do not think I have found any invalid problem. My only problem would be that sometimes my solution is not considered by the author, but who could blame him when it is clearly inferior to the proposed solution?

The book is a good book, no doubt about that. The first thing to check is that solutions are spot on, and that is the case. It could be better if it had more failed attempts, but nevertheless Shaw's failed attempts quite often agrees with me (and many times, with the player's choice in the game). The fact that the theme is random makes it more difficult. I do not know if it is good or bad, but I prefer it like that. In a real game you do not know the theme either.

One point I dislike of the book is that it has no indication of the level of the exercises. Normally this indications are just very rough approximations, but they are very useful.  Each chapter is increasing in difficulty but that is not something you may realize. At least for me it was not. There is a point that you would do better jumping to the next chapter than banging your head against unsolvable problems, and if you realized the exercises to come in the chapter were still harder, you would, but as it stands, you may not do it.

So, do I recommend the book?

I always find it tricky when the answer is not wholeheartedly. There is always many sides in the issue. So let me tell you a story first.

I own this book since 2015. I bought it at the same time as The secret life of bad bishops and Positional decision making. I solved 150 exercises relatively fast, and then put the book down, and only recently (in the last month) I surged through it, solving 350 more.

Why is that? Well, the exercises are difficult! I left the book when it was a pain to go through it, plain and simple.

Of course this is not Shaw's fault, but brings me to a very important point. It is my opinion that any kind of exercise book has to be the right level for you. If it is too easy, you most likely will not think hard enough to improve your chess (and when the exercises are difficult enough, you may be tempted to dismiss them with shallow solutions instead of delving into the subtleties of the problem). If the exercises are too much for you on the other hand, you most likely will put down the book as you will get demoralized.

It is getting repetitive by now, but I'm at 2200 elo points. I have been working hard on tactical puzzle this three months (with Aagaard's GM Preparation - Calculation and Dvoretsky's Recognizing Your Opponent's Resources -do not expect a review on those books soon, though, it will be a long time since I manage to finish enough of them to feel comfortable reviewing them). So my hope is that my tactical awareness has grown and I am now rated higher, but most probably this is only a wet dream of mine, because this things take longer to settle.

Anyway, as a 2200 player, spending unlimited time (between 5 and 10 minutes, but I do not time myself with this book) on the exercises makes me solve around 50% of them. The first on a chapter I solve faster and with no mistakes, while the last ones provoke me nightmares (I failed 9.5 out of the last 11 problems in chapter 8, 8 out of the last 11 problems in chapter 9, and 3.5 out of 5 in chapter 10). All in all, that is the right level for me, and seeing that the starts are easier and the endings are harder, it may be a good book for players rated 2000 elo points or above.

The endings of the chapters is what made me put down the book. I did not know that each chapter starts easy and then goes into mad levels of difficulty. On the contrary I thought that what was to come was even more difficult than what I have already studied, so what was the point in continuing with the book? Now that you are aware of this, please jump into the next chapter when you cannot solve any more exercises of the present one.

My last point before the conclusion is a monetary point. At five minutes per exercise (being on the cautious side, but you will not be solving all the exercises after all, so it is a good approximation), you will spend more than 60 hours with the book. At 24€, you are paying 1€ for each 2.5h of entertainment. I do not think anyone can make you a better deal than that.

So I recommend this book to players above 2000 elo points with some caveats. Do not try to solve all the exercises. Stop and go to the next chapter when you get stuck. You may find that you are comfortable with only half of the problems in the book. Well, more than 300 exercises are plenty!

If you have less than 2000 elo points, go with Weteschnik!

PS: I am reviewing the book while having not finishing it because I am suffering in chapter 12 already, chapter 13 seems to be easy (according to its introduction), but chapters 14 and 15 (starting with problem 558) seem to be hell. I do not look forward to the pain of solving them. So I have decided to move to another book on tactics :)

PS2: I started to make this reviews because it seemed to me that there was a lack of good reviews out there. I bought books based on good reviews that greatly disappointed me. I think that is because the reviews were based on a very quick reading of the book. If I had reviewed this book in 2015 when I put it down, I would have said that it is a great book but with a very high level, while now I think it is just a little bit more difficult that what I'm comfortable with. So yes, I was right, quick reviews do not cut it.
Publicado por Gollum en 14:11