Review: Build up your Chess by Yusupov 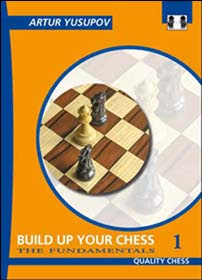 
In this review I want to talk about Yusupov's series in Quality Chess. I have chosen to portrait the first book on the series but it would generally be applicable to every book, not just this one.

Another important caveat I want to make is that I have read the first two books and the last exercises from the last book.

This series of books is an acclaimed collection of exercise books. It has come to my attention that Yusupov has made another book to complement the series which I'm reviewing and Quality Chess is going to publish it in english (if you speak german, you are lucky, because I think it has already been published there). So now that Yusupov's books are again on the spotlight it seems only natural to fill this horrible gap in my blog :)

There are nine books in the series, grouped in three colors (orange, blue and green), named 'build up`your chess', 'boost your chess',  and 'chess evolution'. You are supposed to read each color in this order.

Each of the books is divided into 24 chapters and a final test. Each chapter has an introduction of the chapter, which spans around four pages, and twelve exercises. The exercises have points of difficulty which are rewarded if you have seen some key moves of the solution. You can add up all the points to score your final evaluation of the unit. It may be that you have done excellently down to you have to repeat the unit.

The final test has only exercises which encompass everything studied in the book, and there are 24 of them.

The books aim to give you a solid base in every aspect of the game, so you are going to study some openings (really it is almost only exercises, so not heavy theory there), tactics, strategy and endings. As each chapter delves in a particular subject, you are not going to get bored easily, which is great for someone like me that likes to read various books at once just to change the pace.

All in all you are getting 312 exercises in every aspect of the game. At a standard lenght of 264 pages, you can hardly ask for more, but GM Preparation series are thicker, hence pack more exercises. Maybe compared to them or some other books 312 does not seem much, but I never felt that there were few problems, it just felt right, so no complains there.

The level of the exercises is high enough so that me (at 2200) went through the first two books fast and steady, but always felt I was challenged. As I see it, anyone starting from 1700 can enjoy the books.  Players lower than that should however download the excerpt of the first one and see for themselves, because it includes a complete chapter.

I like exercise books a lot, so I do not care much that the prose is sparse. What do you expect after all? For me the prelude of every chapter before the exercise was something to go through as fast as possible, but the official stand is to study it carefully and spend at least an hour on it. I cannot say it worked much for me as I already knew the subjects discussed, but it is there, so maybe it is profitable for you.

The quality of the solutions for me it is the worst part of the series. It happened to me a lot (a lot maybe is twice per chapter maximum) that exercises that I failed to solve had a flawed solution. Those normally (maybe exclusively) would come from positional exercises.  In those exercises a solution was put forward, but the machine would regard other moves as equal or better than the one recommended.

Positional exercises are the most difficult ones, I know, and the machine likes some lines which may be ok but Yusupov tries to show you the easiest path. But in this kind of case, I need from the author the statement that other moves are possible (and list them) but the one in the solution is the one he likes and reason it, otherwise, I would rather believe the machine at 3300 elo than Yusupov at 2700.

All in all, however, I think this series of books is pretty good. Maybe some solutions are not on the spot, but I have not seen anything so comprehensive in the market in any other place. Hence I recommend the series to anyone from 1700 to 2200. Those below 1700, I would recommend to try their hand at the excerpt. If they feel that hitting a brick wall while doing it, then go for something more elementary,. Those with more than 2200 will certainly pick some things here and there. There are challenging exercises and you will have to put a lot of work. But 9 books is a lot of money invested, so maybe you can go directly to the blue series.

As a testament of the difficulty of the books, I have some anecdotal evidence. A friend of mine and me, both at 2200, got a hold on the last book, and made the final test. We allowed us 2h for the whole thing (so 5 minutes per exercise). We both failed to pass the test narrowly.
Publicado por Gollum en 11:14