For my first post I want to start with a recent book as it may be more useful. However I plan to go back to review some old books too. As long as the book is being sold, the review may be interesting to someone.

So without further ado, let's begin the review of the book Chess Structures - A Grandmaster Guide by Mauricio Flores Rios. 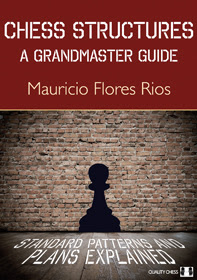 The first thing I want to mention is that I own a ForwardChess copy of the book, not the physical one. The electronic edition is good and the books is really easily read in that format. I never felt I was missing anything with it, but winning, as I did not have to use a board to follow the games.

This books talk about pawn structures and the plans for White and Black in those pawn structures. Usually this subject is more or less restricted to some famous pawn structures: Isolanis, hanging pawns, doubled pawns (especially on the c-file)... a book that immediately comes to mind in that theme is Sokolov's Winning Chess Middlegames.

Well, this book is not that similar. While Sokolov focuses heavily on early middlegame positions (even opening positions) and devotes its pages to very few structures, Mauricio Flores instead tries to widen the range of the book, and normally skips the opening in favor of a generic middlegame position, where the knowledge of the opening is not relevant for the understanding of the basic themes. There are 22 chapters, almost all of them dealing with a single pawn structure (last chapter deals single-handedly with at least 6 of them). The structures, unlike in the Sokolov book, come from very different openings. Although there are some important structures missing (for instance Nimzoindian pawns on c3-c4-d4, which is heavily studied in Sokolov's book), I think Flores made an awesome job fitting that much content in a 464 pages book.

There is one thing to note, though, as the range of positions to study in the book is very wide, the detail in which the positions are studied is low.

Each chapter starts with a clear an concise explanation of the structure under study and a layout of the plans for both White and Black (normally Flores won't take sides, trying to be as impartial as possible). Aterwards some 5 or 6 illustrative games are annotated, trying to highlight the plans stated in the introduction.

I find the exposition method excellent and the comments spot on. However, I cannot shake the feeling that you cannot explain the isolani with 6 games. There is a whole variation in the Caro Kahn based on that isolani (Panov), and there is a whole variation in the QGD too (Tarrasch). One would think that surely those positions deserve more explanations, especially as that specific structure is normally seen in the beginners eyes as a bad structure.

Obviously, there is a reason for this lack of depth. If the isolani got the coverage it deserved, some other structures would have been dropped, structures as important as the one we are discussing. I would have preferred the book to be thicker, and to have a lot of volumes, as in repertoire books, but sadly it was not my choice.

Lastly, I want to point out that although the title suggests the book is aimed at GM level, I think it cannot be farther from the truth. In my view the book target audience should be around a 2000 elo (fide). Lower rated players will benefit greatly from this book too, whatever their level, as the explanations are very clear and accessible. They may get lost into the annotations, but they can skip some of them, as Flores points out which variations are really relevant for the subject under study.

Higher rated players may need more depth in the exposition (I am one of them), but they will surely benefit from the book, as it will give them a broader understanding outside their normal repertoire.

All in all, I recommend this book wholeheartedly. Any player that seriously studies this book will gain a complete picture of the major pawn structures of the game and will hence improve greatly his understanding. I can only hope that Flores gets a chance to expand this work and give more detailed explanations to some of my preferred structures.

PS: Mauricio Flores has started a blog which tries to complement this book and is worth a look.
Publicado por Gollum en 13:35